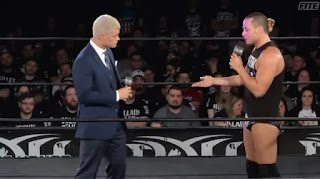 Colt Cabana is on commentary so that's a plus.

Rhett Titus comes out with some underhanded jokes. This is my first time seeing him teamed up with Ferrara and lord I don't know what to expect. MCMG comes out and I had no clue they were tag champs, but it is pretty sick. I think they will do wonders for any young talent they work with. This was just a simple five minute opener defense. I really dig matches like this. It really solidifies a champion as a champion. Straight to the point.

-Daniels, Kazarian, & Scorpio Sky have started a SoCal faction and I low-key am fan girling bc of my So Cal Wrestling/PWG infatuation. They bribe Shane Taylor with a check into keeping the Bullet Club away from them later tonight.

Never seen Woods, but god I've missed Gresham and somehow he seems to have gotten even better than he was a few years ago. This was a really fun, well put together television match. They focused it around the "fluke" victory Woods claims that Gresham got on him a few weeks back and the targeting of Woods leg by Gresham. Both of these played into the finish and it ruled. Had this gone a little longer, it was heading toward great territory.

-Cody Rhodes cuts his first promo since losing the ROH Title to Dalton Castle and it's crazy seeing him work as a babyface. Matt Taven interrupts and DUDE. He's gotten so much better. He lays a verbal beating on Cody and makes me want to see ROH put the strap on him. Good stuff.

So, some things have changed and some have stayed the same in ROH's tag division in the past year. What's changed is that I guess Delirious got over his disdain for Chuckie T and now we GET TO SEE BEST FRIENDS IN RING OF HONOR. What hasn't changed is the YB's are still the king of sprints. This was so much damn fun. Literally one of the most entertaining matches so far this year. It may seem like I'm over ranking this a bit considering it was just a spot fest, but they killed this on every level. Crowd was hot, action was on point. No complaints. Watch this jawn. Bucks win with the pin on Titan.

-Daniels, Kazarian, and Scorpio Sky attack the Young Bucks after the match. Adam Page runs them off. OH MY. 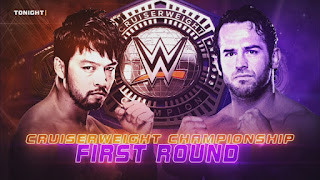 The best thing that I got out of Raw this week was being made aware that 205 Live had started a tournament with a ton of stacked matches. This week's episode in particular has two matches I'm highly interested in. Particularly the main event which features Roderick Strong making his 205 Live debut against Hideo Itami. NOSTALGIA.

-Video package highlighting Daniel Bryan bringing out Drake Maverick (Rockstar Spud) as the new GM to announce this tournament is shown to start the show.

The lucha house party explodes here with this one on one contest and the stakes are high. I feel like this tournament could pull 205 Live out of the slump it's been in because of that fact, to be honest. The commentators said it really well when saying that every match feels like a title match. This is literally all these cruserweights' only chance to get to WrestleMania. There's 16 men and only two of them will get to hit the grandest stage. That's a recipe for some awesome matches. None the less, this was a fun opener that bordered on being just that and being more. It was structured like a main event style match, but compacted into 10-12 minutes, if that makes sense. Dorado hit all his signatures only for Kalisto to roll to the outside to avoid being pinned. Dorado finally gets Kalisto back inside and gets stunned with a salida del sol, but manages to kick out which really gets the crowd into things for the final minute or two stretch. In the end, a sick reverserana and one more salida del sol puts Dorado away.

-Drake Maverick is backstage and lights a fire under the ass of Tony Nese & Drew Gulak, calling them out for being a joke and wasting their potential. They face each other next week. That could be lit.

YES. This is good stuff. Strong & Itami slugged it out in a match totally different than it's a predecessor, thus showing that 205 Live can & does have variety. Roddy still has that special vibe to me that he's had since 2015 so I enjoyed this probably a lot more than others, but I'm still reviewing/rating it from an unbiased perspective. But yeah, this was exactly what you'd expect from a TV style main event from these two. They didn't tone down their style so to speak however they didn't go all the way out either. More like just enough to leave you wanting to see them lock up again. Last few moments had me gasping and they brought the crowd into it as well. Strong gets the shocking victory with the end of heartache. ROD DOG TO MANIA BABY. One step closer.

Email ThisBlogThis!Share to TwitterShare to FacebookShare to Pinterest
Labels: 205 Live 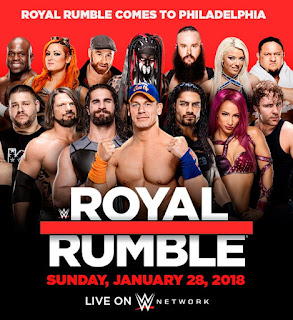 I've read a lot of mixed thoughts on this year's Royal Rumble which I guess comes to no surprise considering wrestling fans are super fickle.

I personally loved the match. The only gripe I had was it being so early on in the show, but the women certainly took advantage of their spot in the main event.

But let's not get ahead of ourselves.

The men's Rumble only had one or two surprises and nothing to the level that everyone expected or wanted. I feel like that's where the internet really ruins wrestling these days because you get so hyped for the impossible to happen then when it doesn't you feel jaded and a great Rumble gets overlooked. I was personally glued to my seat the entire time waiting on one of these huge surprises and if the final 20 minute or so stretch between Reigns, Cena, Balor & Nakamura hadn't been so fucking awesome, I probably would have came off sour too but the final 30 minutes sent this match into all time great territory for me.

You literally had the corporate faces against the underdog internet favorites. You had old school versus new school and everyone was dying to not see another Reigns or Cena victory even though it felt so obvious. That's what made this great. Every Rumble since the Daniel Bryan disappointment in 2014 has been filled with tension, and everyone dreading the ultimate outcome of a Cena, Reigns, Orton, Batista victory. It had to end sometime and every year it was a nailbiter that just ended in disappointment, but this year was a nail biter with an outcome that was approved universally.

The fact that they structured this final stretch as such also helped it a lot as at one point Cena & Reigns squared off in a staredown with Nakamura & Balor. The battles lines were drawn and as said before, it ruled. The underdog finally overcame the corporate majority. This was three years in the making and truly a historic moment as Shinsuke Nakamura is the first Japanese wrestler to win the Royal Rumble.

As for the other matches on the card, I tuned in right at the beginning of the men's Rumble so I only caught half of the show, but what I caught was ace and the annual Rumble was just the tip of the iceberg.

Brock Lesnar, Braun Strowman, and Kane had a chaotic barnburner of a heavyweight title match that I went ****1/4 for because it was quality for what it was. Three big guys barreling through spots and the continued tension between Lesnar & Strowman just straight up rules. We also had a tag title match that honestly fell super flat due to it coming right after the red hot Rumble, but Sheamus & Cesaro defeated Rollins & Gable to win the titles once again.

And in the main event, the women's division delivered a super solid ****+ Royal Rumble with loads of surprise returns and great exchanges. The highlights for me were Lita, Torrie Wilson, & Stacy Keibler, that's my childhood right there, man. Not to mention Michelle freakin McCool. The finish was also another refreshing surprise as Asuka won the first ever women's Royal Rumble. But the real surprise came post match as Ronda Rousey made her way to the ring. A lot of people hated it or were unimpressed, but I personally loved it.

I left this entire weekend of WWE action being extremely refreshed on the product. From the five star NXT to main event to the triumphs of two ever deserving japanese talents in Nakamura & Asuka. This was a weekend for the ages for WWE and I hope they can continue this momentum through the rest of the road to Wrestle Mania!
Posted by Ethan at 6:38 PM No comments: