WWE Raw
July 21st, 2003
Los Angeles, California
World Heavyweight Champion: Triple H (since 12/15/02)
Intercontinental Champion: Booker T (since 7/7/03)
World Tag Team Champions: La Resistance (since 6/15/03)
WWE Women's Champion: Gail Kim (since 6/30/03)
Commentators - Jerry “The King” Lawler & Jonathan Coachman
TONIGHT: Kane vs. Rob Van Dam and Shawn Michaels vs. Chris Jericho
In the ring, Eric Bischoff is here. He says Austin’s run is about to come to an end. He welcomes Linda McMahon to the ring. Linda wants to address Kane. She says he’s been put on house arrest and under serious psychological evaluation BUT that won’t prevent him from coming to work and competing against Rob Van Dam later. Bischoff isn’t too happy with that portion, so he turns his attention to Steve Austin. Before he can start throwing him under the bus completely, Austin comes out to a huge ovation. Austin says he stands by all his decisions because they were what he thought would be best at that given time. Linda says he’s done a good job, but the biggest issue is that he can’t go around assaulting the other superstars as a co-general manager. Bischoff loves when the attention is turned to Austin. Linda says basically that if he can’t follow the rules, he has to step down and he can’t get physical with anyone unless provoked. Austin says it sounds like he has a lot of thinking to do. Linda reminds him that if he steps down, full power goes back to Bischoff then says it may be best if he takes the rest of the night off. Bischoff mocks Austin for this and then Linda says Bischoff should take the night off as well. Bischoff gets ran off from the ring by Austin and Austin shares a beer with Linda McMahon to close the segment. Austin has until next week to decide what he’s gonna do.
1) Gail Kim & Trish Stratus vs. Victoria & Molly Holly (w/ Steven Richards)
Read more »
Posted by Ethan at 5:33 PM No comments: 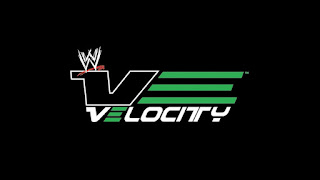 Mr. McMahon hits the ring to start the show. He says last week, Brock Lesnar was taught a lesson and this week, Kurt Angle will be taught one. Before Vince can get too far, Brock comes out to confront him. Vince immediately tells Brock not to cross the boss.. Brock says he doesn’t want to cross the boss, he wants to beat the boss. Brock challenges Vince to a match tonight. Vince accepts BUT NOT TONIGHT. He also tells Brock to leave the arena because if he interferes in Kurt’s match tonight, he will be stripped of the title and fired. Brock says he understands and he also understands can’t F5 him tonight, but he can say one thing “FU.”
1) Chris Benoit vs. Matt Hardy - United States Title Tournament Match
Read more »
Posted by Ethan at 2:52 PM No comments:

The show begins with Chris Jericho’s Highlight Reel. Jericho says he was terrified to come here tonight because of how terrible of a workplace it has been since Kane has been wreaking havoc. Jericho says his guest tonight calmed his nerves because he’s the one man who can get things in order. The returning co general manager.. Eric Bischoff. Bischoff’s goofy ass comes down to the ring in a neck brace. Bischoff says Kane is banned from entering the arena tonight, but we will get to the bottom of this as he’s sent JR to do a one on one sit down interview with Kane in Hartford, CT at WWE Headquarters. Bischoff then shows exclusive footage ON THE JERITRON 5000 of Kane throwing RVD through a wall last week before coming to the ring.
“I was gonna whip a man’s ass…” -Stone Cold
Jericho continues kissing Bischoff’s aaa and OUT COMES STINE COLD STONE COLD STINE COLD. BY FUCKIN GOD. Austin asks Bischoff why he’s sending Kane to Connecticut because he was gonna call him out face to face and whoop his ass. Bischoff asks what that would do besides make Kane hurt more people. Bischoff says this entire thing is Austin’s fault for provoking Kane into being a monster again. Austin goes off on Bischoff, making fun of his neck brace then goes to leave. Jericho taunts him and gets a stunner for his troubles to close the segment.
TONIGHT: Evolution vs. The Dudleys in an Elimination Match, Book/Christian IC Title rematch, & Gail Kim defends the Women’s Title against Molly Holly
Read more »
Posted by Ethan at 10:48 AM No comments:

WWE Smackdown
July 10th, 2003
Toronto, Ontario, Canada
WWE Champion: Brock Lesnar (since 3/30/03)
WWE Tag Team Champions: Shelton Benjamin & Charlie Haas (since 7/3/03)
WWE Cruserweight Champion: Rey Mysterio (since 6/5/03)
Commentators - Michael Cole & Tazz
WE’RE OVER HALFWAY THROUGH THE YEAR. HOW HAVE I MADE IT THIS FAR?!
Replays of Gowen’s triumphant victory last week air to open the show.
Kurt Angle hits the ring to start the night off and talk about the triple threat WWE Title match at Vengeance that Mr. McMahon made last week. Angle tells Brock & Show to BRING IT ON. JOHN CENA interrupts Kurt and in the most puny voice ever Michael Cole says
~”WAIT A MINUTE”~
God, that was hilarious. Cena has on a Wake Forest jersey. He raps on Kurt and says the arena will be empty when they finish the match at Vengeance. The main event should be Taker vs. Cena. Kurt’s  face while Cena raps is fucking hilarious. Angle says he thinks he’s finally found someone in the company who is whiter than he is LMAOOOO. This turns into the infamous KURT ANGLE RAP SEGMENT OH MY FUCKING GODODNDBSJEJEEJJ.

“Hey, Ref, you do that beat box thing right? Come give me a funky beat.” -Kurt Angle
As always, Kurt calls Brian Hebner to drop the beat for him. This segment is a clsssic and you’ve probably already seen it so I’m not gonna recap it, just go watch it. Cena and Angle end up going face to face and it rules. Big Show comes out and chokeslams Kurt after Cena hit an FU on him.
1) Rey Mysterio & Billy Kidman vs. The Basham Brothers vs. APA (Bradshaw & Ron Simmons) vs. Chuck Palumbo & Johnny Stamboli - #1 Contender’s Match for the Tag Team Titles

Yo!! This is cool! The winner of this gets a tag title shot at Vengenace. Bradshaw & Danny Basham lock it up early and Bradshaw destroys him. FORESHADOWING TO THE JBL CABINET IN ~2005 LETS GO. This is Billy Kidman’s return match which is sick. They do an awesome spot of chaos to send us to break with The FBI and APA fighting to the back while Mysterio & Kidman do dives to the floor to take out the Bashams. Back from commercial, APA & FBI fought through the locker room area so it’s apparently down to Mysterio & Kidman and the Bashams in the ring for the #1 contendership. This closing stretch rules. Mysterio & Kidman haven’t lost a step since teaming together in WCW and the Bashams are decent enough to be a good base for them to do their stuff. Mysterio & Kidman win a blast of a match.
Match rating - ***
Backstage, Kurt is being iced up after the chokeslam and FU from earlier. Brock Lesnar comes in to check on him and tries to joke with him. Angle doesn’t think it’s funny and Lesnar says to calm down because “we’re gonna beat that big boy” at Vengeance. Angle says “we?” It’s every man for himself at the PPV!!

Zach Gowen’s contract signing is next. Stephanie McMahon comes out to introduce him. Zach is so happy and confident after realizing his dream and honestly.. it makes me so excited for what I know is coming, Mr. McMahon showing up to ruin his life all over again and sure enough, as soon as Zach signs the contract, Vince & Sable come out. Vince says he’s happy for both Zach & Steph. He announces Brock Lesnar’s punishment for helping Zach last week is a 3 on 1 handicap match later and that Zach’s punishment is facing him one on one at Vengeance. “You might have beat cancer, but you won’t be me.” FUCK. Sable hits Steph with an object and Vince & Sable leave.
Backstage after the commercial, Sable and Vince look to finally be about to get it on AND STEPH RUNS IN AND SPEARS SABLE OVER THE COUCH. HOLY HELL. Officials separate them and VINCE STARTS SCREAMINF. One of my favorite freak outs of his, honestly. He says if Steph wants to fight, she can fight Sable at Vengeance. Oh man..
2) Chris Benoit & Rhyno vs. Shannon Moore & Matt Hardy
God I wish this got more time than it did. It still is awesome while it lasts. Rhyno gets worked over for a Benoit hot tag. Things break down and it rules. Benoit taps out Shannon for the win.
Match rating - **1/2
Backstage, Brock is getting ready for his handicap match. Kurt says he musta really pissed someone off. Brock jokingly asks where Kurt will be during his match tonight but he’s confident in himself because he’s the champion and this is what he does.
3) Eddie Guerrero vs. Ultimo Dragon - United States Championship Title Tournament
Eddie comes out before the match and sarcastically says he sends his well wishes to Tajiri.  The crowd is still cheering him even though he clearly turned heel last week. Eddie says he’s focusing on himself now and entering the US Title tournament. This is a fun match with Dragon although it doesn’t go more than 2 or 3 minutes. Eddie steals the win using the tights.
Match rating - **
Cameras catch Billy Gunn & Torrie Wilson kissing backstage. Earl Hebner walks by right after. They’re in mixed tag action next.
Next week: Eddie vs. Billy + Benoit vs. Hardy in the semi-finals of the US Title tournament
4) Billy Gunn & Torrie Wilson vs. Jamie Noble & Nidia
This was a waste. Noble & Nidia wear some of the new clothes they got with the money they inherited and Gunn & Torrie do the ass routine. The faces win.
Match rating - *
After the match, Noble offers Torrie $10,000 to sleep with him. Billy Gunn attacks him for his troubles. Nidia looks on.
5) The Big Show, Shelton Benjamin, & Charlie Haas vs. Brock Lesnar - Handicap Falls Count Anywhere Match
Brock fighting from underneath and then exploding and destroying everyone is awesome. They go to the floor and Brock tries to F5 Benjamin off some steps through the announce table, but Show breaks it up. Show hits a HUGE chokeslam off the aforementioned steps for the pinfall. Awesome spot.
Match rating - **3/4
The Big Show stands tall to close the show. 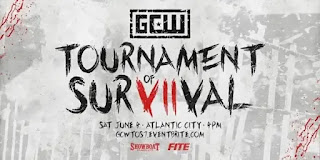 I was live in attendance for this.
1) Hoodfoot vs. Rina Yamashita - First Round Match
Perfect way to kick off the weekend. It’s my first time seeing Yamashita and she exceeded expectations. Hoodfoot has become a favorite of mine this year and he looked awesome here. He & Yamashita started at 100 and never hit the brakes. Just a great deathmatch that never slowed down, but was competent enough to make sense and not feel like a clusterfuck. Hoodfoot is good at that and clearly I’ve been sleeping on Yamashita because got damn. This ruled. Yamashita wins to advance.
Match rating - ***3/4
2) SLADE vs. Matt Tremont - First Round Match
Read more »
Posted by Ethan at 12:26 AM No comments: