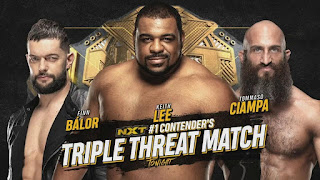 Coming off a hot Survivor Series showing that boosted them over AEW in the weekly ratings war, can NXT keep the momentum?

Okay, so, this match answered my opening question right of the bat - yes. This is easily one of the best WWE/NXT matches of 2019 and one of, if not the best cruserweight title match since the title's reintroduction. No offense to Drew Gulak, Tony Nese, or even Buddy Murphy, but these two crushed this title match. Lio Rush is just such a good dickhead and Angel Garza is super easy to love. Rush jumping Garza before the lights even came on during the ring introductions fucking RULED. And set the tone for a way more aggressive cruserweight title match than we are used to. This had what most of them lack - urgency. A reason to stay glued to your screen. And they kept from bell to bell along with a hot, wild ass finishing stretch to boot with a bunch of false finishes for a very responsive crowd. I am FIRED ~ UP ~. Angel Garza wins a banger via submission to become the new cruserweight champion. I want a rematch, god dammit.

Shayna Basler video package airs talking about her match with Rhea Ripley next week, she says she's just another trend of the week that will fall to her.

Finn Balor promo is next and it's GOOD. He runs down Keith Lee and Tommasso Ciampa in route to their match later on to determine who faces Adam Cole for the NXT Title.

Cameron Grimes is Trevor Lee's WWE incarnation for those who didn't know and its... weird. But the booking of it match wise has been good so far. He stomped everyone in quick matches for a few weeks only for KUSHIDA to beat him last week. This led to Grimes having a breakdown and attacking KUSHIDA backstage. Which leads us here where Raul Mendoza scores an upset win in an extremely short amount of time thanks to KUSHIDA coming down and distracting Cameron Grimes. Ready for that rematch!

First off, Mia Yim rules. That was the big highlight of this. Kai won the match which was fairly short, but decent. After the match, Yim snapped and suplexed Kai off a balcony through two tables in dangerous fashion in the crowd. DANGEROUS. So sick, though.

This was honestly pretty fun. Fandango almost killed one of the Singh brothers with a powerbomb on the apron at one point which was brutal. Breezango wins.

Squash for Bianca. Luv her. Bye.

This was super fun, especially towards the end with the exchanges they came up with. However to me, it just couldn't match the Garza/Rush match from earlier. Which is a super weird thing to think about when you look at both on paper. I hate to say it but I feel like Finn being on coast mode until the finishing stretches typically drags his matches down. Keith Lee ruled all around here and Ciampa was fine. The big highlight wasn't one person, but moreso the various spots near the end. Very innovative finish with Finn getting the win. God help us during his match with Cole, I hope they both bring their A game. 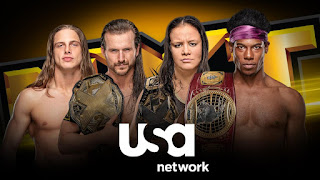 Wednesday Night Wars are on and underway. I admittedly watched AEW live and just caught the NXT replay, but I'm reviewing them both and posting at the same time.

I haven't watched NXT since Takeover 25 so I have a little catching up to do but let's get to it!

Insane choice for an opener, but it was definitely the right move because the crowd was red hot and ate every bit of this up. We all know the story going into this without even really having to look into it, Cole is the cocky, smug reigning champ and Riddle is the vicarious challenger. The fans eat it up and Cole & Riddle give us one hell of a bombfest that hit every marker for the 15 minutes or so they were in the ring. Amazing energy and not one mis-step. Awesome contest with Cole retaining by use of his cast despite multiple moments where it felt like Riddle was gonna come out on top. Much better than Cole/Gargano at Takeover 25 oops.

Post-match, I get goosebumps as FINN GOD DAMN BALOR returns to NXT. He comes to the ring and simply says "As of now, Finn Balor is NXT" and Cole scurries away. This is gonna rule. It's what Balor needed and will be a huge boost to my interest (and I'm sure others' interest) in NXT on Wednesday nights.

Velveteen Dream comes out and declares his intent on getting the North American Title from Roderick Strong.

It's AEW's first live broadcast. on TNT from Washington, DC - SOLD OUT. 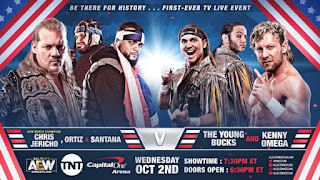 Interesting, but sorta logical choice for the first ever Dynamite. Including one the biggest names in Cody to kick things off makes sense, but looking on paper a Cody/Guevara match isn't very appealing. They somehow really busted out a great, high energy opener here though which ended with a handshake/moment that will be remembered as an epic piece of foreshadowing.

And after the match, Cody's arch rival for months and the man he will challenge at Full Gear, the first PPV since the AEW TV era next month, CHRIS JERICHO hits the ring for a god damn beatdown. Oh, he's also the AEW Champion how must I forget. Good stuff to get Jericho in during the first half hour.

This was essentially just a showcase for MJF. I'm really excited that Cutler got the job and chance to work with AEW bc of his association with the Bucks. The Cutler Bros ruled in a circa 2009-10 era PWG so this is well deserved. I doubt he will ever be more than a quick sprint guy and that is fine because he's a very solid base esp in this position. MJF goes over and looks good.

As you probably know, this was supposed to happen back at Double or Nothing in May, but PAC pulled out for Dragon Gate or disagreements or whatever reason. BUT he is here now and we get this match. Hangman is still a big hit or big miss for me. Here, he was decent enough however PAC was what really shined to me just because he's such a good villain right now. This was solid though, super hard hitting and urgent - exactly how it should have been.

This match is to crown the first ever AEW Women's Champion. Both women get good responses. I am admittedly pretty unfamiliar with both, but I left a fan of them both. Very good first display for what the women's division will be in AEW despite not being a barnburner like I'm sure some had hoped. But definitely a fantastic first showing for both women in my opinion, as someone who was unfamiliar with both. RIHO wins and is my new favorite wrestler <3

Lord have mercy. So, the match was whatever. Basic wild Elite six man tag. All the angles, the finish and post match was the must see part of this. Jon Moxley runs down to beat the hell out of Kenny Omega and put him through a glass table during the middle of the match to hype their upcoming bout at Full Gear. Eventually, the bad guys go over and we proceed to get a segment that I never expected to ever see in my life, much less get excited over. Jericho and his LAX buddies proceed to continue to take advantage of the 3 on 2 advantage on the Bucks. Cody Rhodes runs down because ELITE/BULLET CLUB 4 EVER only to get lowblowed by the man who shook his hand earlier Sammy Guevara. DUSTIN RHODES is out next cause he ain't having that shit. Dustin cleans house only to get taken out by.... JACK SWAGG-- I mean.. JAKE HAGER. What the fuck. This was so hype. I admittedly I always oddly liked Jake in WWE under the name Jack Swagger, and just felt he was under utilized and this debut felt like a total rebirth. He clears everyone out to an insanely hot and responsive crowd.

Jericho, Ortiz, Santana, Guevera, and Hager all stand tall to close the show and it looks like we have our first stable in AEW!

Final thoughts: They tried to cram a lot in here to get every character and a feud a good start on this big first night and with that in mind, it felt a litle cramped at times, but that will shake out in the next few weeks (I'm writing this in retrospect). The ending of this left me insanely stoked to see what comes next and all in all, this was the best episode of wrestling TV in a long time and definitely felt like the start of a new era.