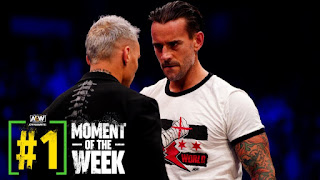 Commentary - Excalibur, Jim Ross, & Tony Schiavone
The 100th episode of AEW Dynamite and the go-home show/final Dynamite before All Out live on PPV this Sunday.
1) FTR (Dax Harwood & Cash Wheeler) vs. Proud n Powerful (Santana & Ortiz)
Now THIS. This is what this pairing was capable of all along. The Charlotte match which I was there for live really fell flat for me. Probably because of burn out and the placement on the card. This being first helped it, but the work was indeed superior to that of the Fight for the Fallen match. Maybe the injury Cash suffered added to the stakes of this, I’m not sure, all I’m sure of is this ruled and highlighted both teams’ strengths. Santana & Ortiz looked like crazy motherfuckers. FTR were FTR. Yeah. Some great nearfalls down the stretch and Santana & Ortiz get the win. GIVE THEM A TAG TITLE SHOT NOW GOD DAMMIT.
Match rating - ***3/4
Backstage, Daniel Garcia and 2.0 say they are going to do everything in their power to ruin the Punk/Darby match and keep it from happening at All Out.
Read more »
Posted by Ethan at 12:42 PM No comments: 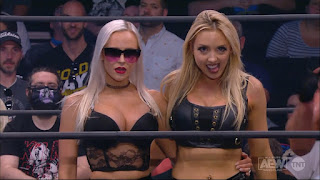 Commentators - Excalibur, Taz, Chris Jericho, & Mark Henry
This is the first taped edition of Rampage, but the crowd is HOT.
1) Lucha Bros (Penta El Zero Miedo & Rey Fenix) vs. Jurassic Express (Jungle Boy & Luchasaurus) - AEW Tag Team Title #1 Contender’s Match
The Young Bucks sit on the stage to watch the match to see who they will face in a Steel Cage at All Out. This is a fantastic match and the perfect way to kick off the show. Arguably the two teams in AEW that aren’t The Young Bucks going at it in front of a great crowd. Moves and spots and fun stuff. Lucha Bros win and their feud with The Young Bucks is officially reignited. Let’s go!
Match rating - ***1/2
After the match, The Young Bucks attack Penta & Fenix.
Punk/Darby Allin video package airs.
TNT Champion Miro comes out. He drags Fuego Del Sol to the ring and has clearly beaten the hell out of him. Miro rips his mask off OH NO :( but EDDIE KINGSTON IS HERE. He doesn’t even talk on the mic despite showing up with one in hand, King charges the ring and we get an awesome pull apart between he & Miro. It looks like Kingston is finally answering the challenge from Miro that he’s been laying out the past week or two.
2) Tay Conti vs. The Bunny
This stems from Bunny slapping the shit out of Tay on Dynamite when she declined her offer to leave Dark Order and join HFO. Very fun stuff here despite the match not being that great. Just standard stuff. Penelope Ford and The Bunny have clearly formed an alliance as she hands Bunny brass knucks which allows her to get the win.
Match rating - **
3) Kenny Omega & Brandon Cutler vs. Christian Cage & Frankie Kazarian
This is about what you’d expect. Tom foolery from Omega & Cutler. Christian and Kaz are out for revenge on the shiesty heels. Really not that serious of a match, though, just strongly distinctive roles and a playful little contest. Omega ends up walking out on Cutler. Christian hits the Killswitch on Cutler for the win as Omega & Don Callis look on from the stage.
Match rating - **
Posted by Ethan at 12:42 PM No comments: 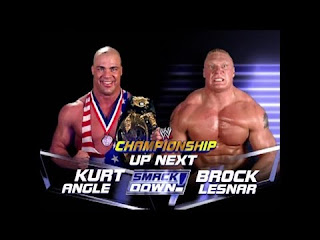 Footage shows Brock Lesnar walking into the arena earlier in the day. They show Team Angle walking in next. Angle has a black eye and looks stressed. Mania comes one week early tonight as Angle defends the WWE Title against Brock Lesnar.
1) Shelton Benjamin & Charlie Haas vs. Rey Mysterio & Billy Kidman
Oh man this is gonna be a blast and IT WAS. Everything you could’ve really asked for from these four. Rey flies and bumps around. Haas & Benjamin isolate Kidman and Rey obviously gets that hot tag and goes ballistic. Lots of fast paced action here when shit breaks down. Kidman almost fucks up a shooting star press. Rey hits the 619, but Kidman gets caught in a stacked german and gets pinned.
Match rating - ***
Brian Kendrick is backstage with flowers for Stephanie McMahon. She thanks him as he nervously hands them over and she continues with her phone call.
Read more »
Posted by Ethan at 3:26 PM No comments: 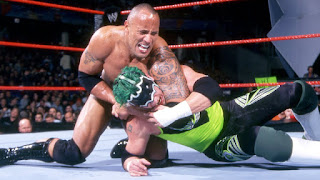 Show opens with Bischoff backstage telling the locker room he needs them to be warm and welcoming to Stone Cold this week. I guess last week made him change his tune after Austin destroyed 3MW. Rock interrupts and says he isn’t facing Booker T tonight. He says he wants Austin at WrestleMania and that’s his focus. Bischoff still wants him to compete and Rock says he will compete, but he wants to pick his opponent.
1) Rob Van Dam & Kane vs. Chris Jericho & Christian
Good little opener here. Balls to the wall for the majority of the time. Van Dam nails a frog splash on Christian only to eat a lionsault from Jericho immediately after and get caught for the three count.
Match rating - **1/4
Before the last match, they replayed Jericho’s attack on HBK from last week so you kinda knew what was coming here. Jericho celebrates after and gets SUPERKICKED BY SHAWN MICHAELS who says “See you at WrestleMania, boy” - guess his challenge from last week is accepted!
Booker T comes out. He doesn’t wanna wait til WrestleMania. Triple H wanted him to “dance” and he calls him out saying if he walks down that ramp, he’ll DANCE ALL OVER HIS PUNK ASS. LETS GO. Ric Flair comes out instead and basically says Booker is only fit to carry their bags. Book slaps him and goes to find Triple H in the locker room. H gives him a dollar to get him a towel so Book beats his ass and hits him with the door LMAO. Hell yeah.
Back from commercial, H tells Flair that Booker JUMPED HIM FROM BEHIND LOL. They go to find Booker before he leaves the building.
2) Jeff Hardy vs. Rico (w/ Jamal & Rosey)
Read more »
Posted by Ethan at 3:23 PM No comments: 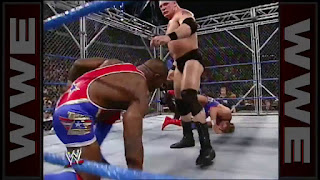 TONIGHT: Brock Lesnar vs. Paul Heyman in a Steel Cage Match
1) Rey Mysterio vs. Tajiri vs. Jamie Noble - #1 Contender’s Match for the Cruserweight Title
What a damn way to start the show. The winner of this faces Matt Hardy for the Cruserweight title at WrestleMania. Lots of great multi man spots here and an all around good flow that was honestly just a Mysterio showcase. Noble & Tajiri bump around nicely for him. Noble, being the heel, took most of the spots which allowed for Tajiri to get some stuff in, too. Mysterio & Tajiri have a killer exchange to finish things where Rey wins with a roll up/pinning combo of sorts.
Match rating - ***
Later tonight: Hulk Hogan appears, plus Rhyno & Chris Benoit vs. Benjamin/Haas
2) Los Guerreros vs. Chuck Palumbo & Johnny Stamboli (w/ Nunzio)
Read more »
Posted by Ethan at 3:09 PM No comments: 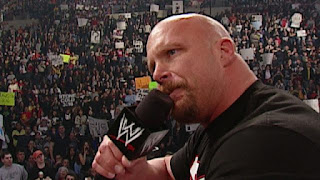 3 Minute Warning and Rico are in the parking lot waiting on Steve Austin to show up per Eric Bischoff’s orders.
TONIGHT: The Rock appears plus Booker T vs. Scott Steiner
Booker T opens the show. Last week, he won a battle royal to become #1 contender to Triple H’s World Heavyweight Title. They will face off at WrestleMania. For tonight, though, Triple H interrupts Book and deliver this infamous very racist and disgusting promo about how his “kind” aren’t meant to be champion and that he’s not a competitor, he’s an entertainer. Book says no matter what H says, he can’t take away the fact that he will be challenging him at WrestleMania. H says good luck making it there after facing Scott Steiner later tonight.
1) Jeff Hardy vs. Christian
Read more »
Posted by Ethan at 3:04 PM No comments: 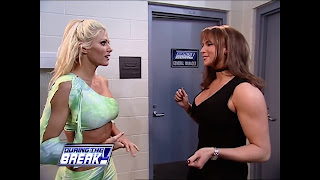 Vince McMahon opens the show. He is here to talk about screwing Hulk Hogan at No Way Out on Sunday. He says Hogan won’t be here tonight and starts bragging about what he did to him. He says he will show footage of what happened later tonight for anyone who missed. MCMAHONAMANIA IS RUNNINGWILD.
1) Torrie Wilson & Funaki vs. Nidia & Jamie Noble
This has a lot more action than you’d expect. Noble & Funaki kill it. Torrie gets the hot tag and pins Nidia even after an interference bit from Dawn Marie.
Match rating - **
Stephanie McMahon comes out post match to announce she has closed a deal with Playboy Magazine and does a tease as if she’s gonna be “bare” in the magazine. Instead though she announces Torrie Wilson will be in Playboy! Torrie jumps for joy and Dawn Marie looks pissed.
DURING THE BREAK. Torrie asks Steph if she’s REALLY gonna be in Playboy. She says yes and the shoot is next week. Brian Kendrick shows up and Steph refers to him as “naked boy” and Kendrick apologizes for streaking last week. Kendrick asks if he can face Kurt Angle tonight to prove that he really wants the job here in WWE. Steph says if he can last five minutes with Kurt then she’ll sign him.
“Hey Brian Kendrick, don’t quit your day job.” -Michael Cole
2) Nunzio (w/ F.B.I.) vs. Eddie Guerrero (w/ Chavo Guerrero)
“This threesome has become a force in recent weeks.” -Michael Cole
Read more »
Posted by Ethan at 1:08 PM No comments:

Eric Bischoff comes out looking beat to hell in a sling and all. He says Stone Cold is banned from the building tonight, but will be on the show next week. Tonight's main event is a #1 Contender's 20 person Battle Royal. Bischoff then introduces.. THE ROCK. Rock babbles a bunch and really gets the crowd going as they shower him in boos. He also announces he is entering the Battle Royal later tonight.
1) Jazz vs. Jackie
Victoria is on commentary and it’s honestly just fuckin awkward. Jazz wins this pretty quickly and proclaims once again that the bitch is back. TRISH STRATUS RUNS DOWN TO A HUGE POP AND They do a pull apart brawl thing. Welcome back Trish!
Stacy Keibler got Test set up with a gig at a company that turns out to be Girls Gone Wild. She’s upset after the fact, but doesn’t have long to cope because Chief Morley books her & Test against Jericho & Christian for later.

JR sits down with Goldust to talk about how he was electrocuted by Orton & Batista last week. Turns out this is where Goldy's signature stuttering develops from. Aside from that, Goldust says he will be back soon.
2) Kane (w/ Rob Van Dam) vs. William Regal (w/ Lance Storm)
"Oh yeah that's real impressive, Kane. Just make sure your mask don't get turned sideways." - Jerry Lawler
Read more »
Posted by Ethan at 1:01 PM No comments: