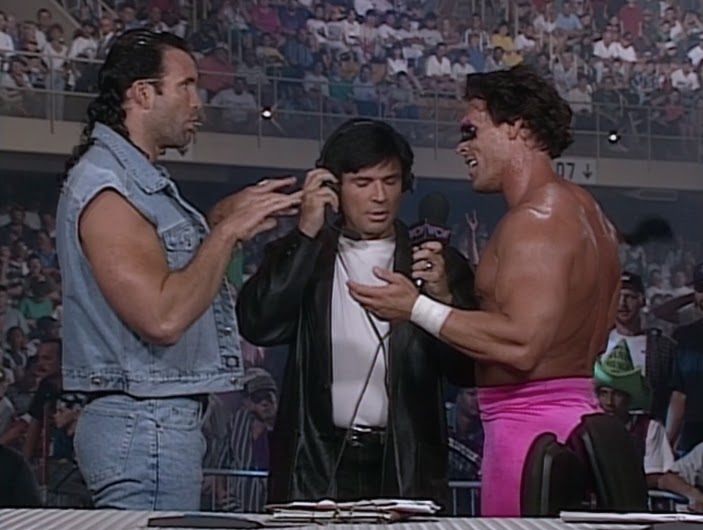 The Shark opens the show on the ramp to discuss the hair shaving he suffered last week at the hands of Big Bubba. Mean Gene Okerlund hosts the interview. Shark says he’s not a Shark.. he’s a man and his name is John Tenta and he’s gonna destroy Big Bubba and make him feel how he felt last week! AW HELL. Tenta charges the ring and we are underway.

Tenta hits a body slam and some stuff starting off on fire. Bubba flees the ring when Tenta pulls out some scissors. This leads to a countout victory for Tenta.
Awesome backstage interview segment between The Steiners and Sting/Luger, they clash tonight and I can't wait.
2) High Voltage (Ruckus & Chaos) vs. Faces of Fear (The Barbarian & Meng)
This is the WCW debut for High Voltage. Faces of Fear fucking destroy them. Barbarian hits Ruckus with a belly to belly off the top turnbuckle and considering size of them both, it’s nuts. Mafia Kick from Meng gets them the win.
Match rating - **

My god. Disco Inferno... He gets destroyed here basically.

Hacksaw looks the same here as he did in his Raw appearances 10 years later lol. Regal talks shit about America in the camera and it's great. This doesn't go very long. Duggan tries to cheat and the Bluebloods come down, allowing Regal to scoop a roll up for the three count.

Gene Okerlund has a post-match interview with Regal to hype his match with Sting. I can't wait for that.

Meanwhile, Chris Benoit and Kevin Sullivan are arguing. Oh boy. This is my first time seeing all this Benoit/Sullivan stuff in real time after hearing about it from so many people and in so many different documentaries.

FINALLY. Something with some substance. Flair & Anderson bring the goods just like last week and we get an old school tag match with RNR. Nothing all that great, but solid stuff. Post-match, Heenan teases not managing Flair & Anderson only to announce he will "coach" them to beat the NFL players they are facing in a few weeks. Heenan insists he's still in retirement and is only coaching bc he wants to prove wrestling is a different world from the NFL. Anyway, this rocks especially considering my taste in wrestling recently. So much old school shit and awesome spots. RNR catch Anderson & Flair both in figure fours and people go nuts. This cuts us to commercial and afterwards, Anderson & Flair have cut off RNR’s early flurry and cut the ring off for a while. Rob Gibson gets the hot tag and clears house for a second, but can’t get anything going. Flair & Anderson get the victory.
Match rating - **1/2

Arn Anderson cuts a promo at ringside with Mean Gene. Anderson says he’s TOO THICC to play pro football. Flair walks up and lays into the aforementioned NFL players. Flair says this is a message to the entire Panthers organization.. we are thicker, we are sweeter and we are ALL NIGHT LONG. Bobby Heenan walks up and says he has to decline Flair & Anderson’s offer to manage them at the Bash. HOWEVER, he will COACH them. Brain pulls out his All Madden trophy from 1988. This is a god damn mess.
GLACIER IS COMING TO WCW video package airs.

After the match, The Giant choke slams Ice Train’s partner Scott Norton and that brings out Hugh Morris for a match.
8) Scott Norton vs. Hugh Morris
“There’s a strange soul…” -Bobby Heenan
Morris drops a bunch of elbows on Norton who according to Bischoff looks like he’s having a “mild seizure”.. Morris goes up top for a moonsault, Norton attempts to catch him and it doesn’t work, but it leads to the finish as Norton pins Morris.
Back from commercial, we see NFL players Mongo McMichaels and Kevin Green at the WCW Power Plant getting a game plan together for the Bash. They’re having trouble comprehending that they should think from a wrestling perspective instead of football. Mongo suggest they find a coach.. Macho Man Randy Savage is who they decide on.
9) Sting & Lex Luger (c) vs. The Steiner Bros (Scott Steiner & Rick Steiner) - WCW World Tag Team Title Match
As this thing gets going, Randy Savage calls into the commentary booth. He accepts Mongo & Green’s request for him to manage them at the Bash. Heenan tries to play it cool, but clearly hates this since he will be on the other side managing Anderson & Flair so he tries to talk Savage out of it, but to no avail. Back to the match, The Steiners try to isolate Sting. He fights back against Rick and locks in the deathlock so Scott runs in to break it up. This allows Rick to try to control things again, but Sting keeps fighting and hits a reverse ddt and makes the tag to Luger. Luger lifts Rick up into rack position and Scott breaks it up again. Great tag wrestling here emphasizing the simple stuff. The Giant ends up coming down around 7 minutes in and chokeslams Rick Steiner so the ref calls for the bell.
Match rating - **1/4
After the match, Sting & The Steiners clothesline The Giant to the floor and he loses his shit.
Meanwhile, at the commentary table, Scott Hall re-emerges. He tells Bischoff to sit down and re-emphasizes that they are here and are gonna finish the war that Bischoff started, CHICO. As Hall continues to verbally attack Bischoff, STIIIING walks up. So sick. This feels huge, immediately. Sting says that Scott Hall must not know where he is... HE'S IN THE JUNGLE BABY and Sting heard everything he had to say about him and WCW. Sting says he'll take on all three of "them", but he only sees one right now.. so how about they go one on one right now. !!!! Hall says he's down, but no one tells him what to do or when to do it and tosses his toothpick at Sting. STING SLAPS HALL AND SECURITY SEPARATES THEM. LETS FUCKIN GOOOOO. Hall backs away and says he has a BIIIIG surprise for Sting next week. Big Kev, I assume??? Oh man. Helluva show closing angle.