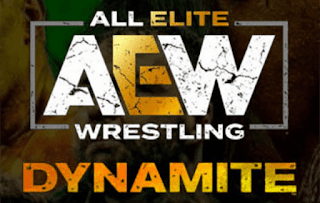 Replay of The Young Bucks turning heel last week. It didn’t sit well with me in the moment because of all the back and forth with their characters, but now that they are solidifying their stance, this came off very well. The replays were meshed with a promo from the Bucks explaining why they did what they did and that they needed to get that edge back. Let’s go.

Mike Tyson is backstage. MJF tries to get him to trade sides and offers him a contract or something. Tyson rips it up.

There’s so much to unpack here. This got a solid 25 minutes if my calculations are correct and it made the most of every second. That opening video package showed us that the Young Bucks are fully bad guys now and here they solidified that by not only entering the arena with Don Callis, decked in new gear with no tassels, but also by working a completely different style than normal. Sure, they hit some super kicks and flew around when necessary, but this wasn’t showy Young Bucks. This was mean, gritty, shit eating coward Young Bucks. I’ve seen this before in their prior heel runs on the indies and New Japan, but this is the first time we’ve seen it in AEW and as said before, I hated on the closing angle like week along with everyone else, mainly because of the long drawn out road to what we got here, but I love what we have now in the Bucks and how much they’ve changed things up. On the other side of the ring, you have PAC & Rey Fenix, two of the best single wrestlers in the world in their own right and two men who have caught fire recently, especially Rey Fenix who has arguably been the wrestler of the year in 2021. This was recipe for perfection and it’s damn near what we got. Just superb tag team wrestling on free TV and it wasn’t even a spotfest. Awesome storytelling and pacing. Great action. Not much more you can ask for, especially out of a damn TV opener. This ruled, one of the best Dynamite matches of the year so far right behind Omega/Fenix.

Backstage, Alex Marvez is with Hangman Page & the Dark Order. Marvez asks for Hangman’s thoughts on Omega & The Bucks reuniting. He avoids the questions and talks about John Silver’s shoulder recovery and then dips out to get some egg rolls for the gang.

Back from commercial, Chris Jericho, the Inner Circle & Mike Tyson are with Alex Marvez. Jericho explains how he & Tyson made amends and that despite that, Tyson will call it down the middle in his match with Dax Harwood tonight where Tyson is the special enforcer. 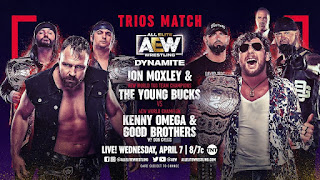 In all honesty, I tuned in at the tail end of this, but what I caught was a lot of fun. Caster’s first big singles match and it got a decent amount of time, not sure how the first half was, but second half delivered and was an enjoyable way to start the show. Page wins. 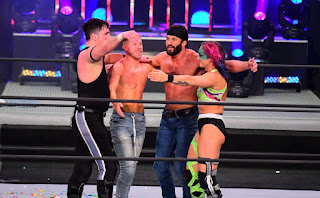 Commentators - Excalibur, Jim Ross, & Tony Schiavone
1) Christian Cage vs. Frankie Kazarian
Huge way to kick off the broadcast tonight with Christian’s first match back. I was fairly excited for this, but can honestly say it exceeded expectations. It went almost 20 minutes, nearly reaching a time limit draw. I think it did wonders for the story of Christian having to get back in the groove of things, just for him to ultimately prove he’s still got it. Kaz hit an insane flux capacitor for an awesome near fall. Seeing Christian take that made me gasp. This was a real intense hard fought match. Christian wins with the kill switch.
Match rating - ***1/2
Darby Allin video package on Matt Hardy. It shows Darby & Sting walking and it’s pretty great. Darby says money doesn’t mean shit to him and Matt is going to have to earn his respect the hard way.
Jade Cargill pre tape promo. She talks down on Red Velvet and says she will never be her because nobody could ever because “I AM THAT BITCH”
2) Cody Rhodes (w/ Dustin Rhodes & Billy Gunn) vs. QT Marshall
Read more »
Posted by Ethan at 9:43 AM No comments: