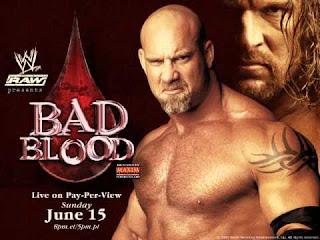 World Heavyweight Champion: Triple H (since 12/15/02)
Intercontinental Champion: Christian (since 5/18/03)
World Tag Team Champions: Rob Van Dam & Kane (3/31/03)
WWE Women's Champion: Jazz (since 4/27/03)
Opening video package is awesome. It recaps how we ended up at H & Nash in Hell in a Cell with Foley as the special ref.
“And believe me, there will be hell unleashed…” -Mick Foley
Commentators - Jim Ross & Jerry “The King” Lawler

“LOOK OUT!” -Jerry Lawler
1) The Dudley Boyz (Bubba Ray & D-Von) vs. Rodney Mack & Christopher Nowinski (w/ Theodore Long)
“Why is your white brother always telling you to get the tables?” -Chris Nowinski
Mack and D-Von lock up before the bell. It’s awkward and not as cool as shit like that is sometimes, lol. So what a start! Crowd seems hot, this show feels.. cool? Which anything will feel better on the eyes and ears after the atrocity that was Insurrextion a week prior. Anyways. This match really is all about that quote from Nowinski I wrote out at the top of this match review. This is a perfectly fine opener. Good work from everybody. Bubba gets a nice hot tag, there’s a good near fall or two. Teddy gets on the apron and distracts D-Von when Bubba does the “get the tables” spot and it costs them that moment. D-Von goes to swing at Teddy and Rodney nails him from behind and shit goes downhill from here. Bad finish with Nowinski getting the cheap victory over Bubba. Fun match otherwise.
Match rating - **
King & JR replay how all the different contests that will take place in the Redneck Triathlon were determined.
This leads into Terri, backstage, hosting the first event in this.. triathlon between Steve Austin & Eric Bischoff.. a burping contest. This is.. somethin else. These burps are so clearly phoned in.. it’s .. bad lmao. I have to go, y’all.. Austin wins the “contest” for those who care.
2) Test vs. Scott Steiner
“You’ve always been a little voyeuristic.” -Jim Ross
Read more »
Posted by Ethan at 11:17 PM No comments:

They show replays of last week’s big Rey Mysterio title victory to start the show.
1) Rey Mysterio (c) vs. Matt Hardy - Cruserweight Title Match
Well, Hardy didn’t waste any time taking his rematch. Before the match, he slaps Crash & Shannon Moore backstage, blaming them for his loss last week. So, Hardy is going at it alone this time. Hardy charges Rey at the bell setting the tone for this match at a fever pitch. They pack a lot in here. Rey flies around and sells super well once again. Hardy is so aggressive that it costs him repeatedly, even in the finish. Rey wins with the West Coast Pop to retain. This Rey title win has already been solidified with this one match.
Match rating - **3/4
Piper’s Pit is up next. Piper & Sean O’Haire’s guests tonight are the Tag Team Champions Eddie Guerrero & Tajiri. They have food for them. Piper tricks Tajiri into giving O’Haire his tag team title belt. O’Haire doesn’t wanna give it back so Tajiri mists Piper and Eddie flips the table over and clocks O’Haire. Man.. this was satisfying as fuck because this Piper/O’Haire shit is terrible.
Read more »
Posted by Ethan at 11:14 PM No comments:

Triple H approaches Stone Cold Steve Austin in his office to start the show. He wants to know who the special ref for the Hell in a Cell Match is. Austin says H has to wait to find out just like everyone else.
GOooooldberg
GOOOOLDBEFG
Yea! Goldberg is here to start the show. Oh, wait, it’s a match!
1) Goldberg vs. Rosey
Jim Ross reiterates Rosey being 400 pounds like three times before the bell even rings. Chris Jericho shows up and sits in a chair at the top of the ramp to watch this unfold since he has to face Goldberg in 6 days at Bad Blood LIVE ON PPV. This is rocky, but they make it through. Jericho tries to interfere and fails. Goldberg wins.
Match rating - *1/2
2) Rob Van Dam vs. Rene Dupree
Read more »
Posted by Ethan at 10:58 PM No comments:

WWE Smackdown
June 5th, 2003
Anaheim, California
WWE Champion: Brock Lesnar (since 3/30/03)
WWE Tag Team Champions: Eddie Guerrero & Tajiri (since 5/18/03)
WWE Cruserweight Champion: Matt Hardy (since 2/23/03)
Commentators - Michael Cole & Tazz
Roddy Piper & Sean O’Haire begin the show. Piper attempts to bring out Zach Gowan as a guest on Piper’s Pit. Mr. McMahon comes out instead. He says that he’s gonna give Gowan a chance to live his dream next week. He brings Gowan comes out with Mr. America and Vince says if Gowan can beat him in an arm wrestling competition next week, he can get a contract with WWE. Hogan tries to step up to represent Gowan in the competition, but Vince won’t let him and says “Gowan does have two arms right?” Jeeeeeesus. More leg jokes as Vince leaves after cheapshotting Gowan and Mr. America runs he, Piper, & O’Haire off.
1) The Undertaker vs. Chuck Palumbo
Read more »
Posted by Ethan at 5:59 PM No comments:

Show opens with a truck pulling into the arena and it’s THE ROCK. He’s a guest on the highlight reel tonight.
1) Trish Stratus, Ivory, & Jacqueline vs. Jazz, Victoria, & Molly Holly (w/ Theodore Long)
Lawler says “puppies, puppies, & more puppies” as the women are making their entrances.. god I hate that motherfucker. Victoria and Trish start things off and Victoria hits the spider’s web for an early two count. The action really never slows down here and mostly everyone gets their stuff in. Ivory gets the big victory as she pins the women’s champion, Jazz.
Match rating - **
Back out in the parking lot, GOLDBERG is here.
Read more »
Posted by Ethan at 5:52 PM No comments: 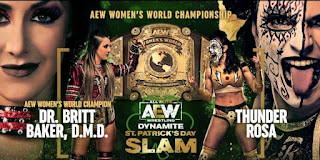 We are on the anniversary of one of the most historic women’s matches in the history of pro wrestling and the same two women meet on this night for round three in a Steel Cage!!
1) “Hangman” Adam Page, Jungle Boy, & Luchasaurus vs. Adam Cole, Kyle O’Reilly, & Bobby Fish
“And here comes THE champion.. THE man.” -Jim Ross on Hangman Page
Read more »
Posted by Ethan at 2:31 PM No comments: 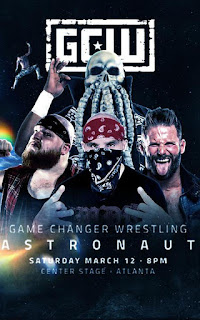 I attended this last weekend and normally I’m too worn out to review shows I attend live, but I’m feeling like giving this a shot.
1) AR Fox vs. Nick Wayne
Getting to see AR Fox live has been one of my favorite things about going to so many GCW shows in the past year. He was one of my favorites when I first started watching the Indies like ten years ago, so it’s a nostalgic hit for me. Nick Wayne is basically a prodigy. A young man who signed a contract with AEW at 17 years old.. just insane. Much like this match. This was truly everything you’d expect in your head when seeing it on paper. They don’t go crazy with nearfalls and stuff, clearly saving some stuff considering they’re first on the card. I respect that though and this was a perfect opener because of how they worked it. Just a blast and a good showcase for both guys. Fox wins with the 450.
Match rating - ***
2) Gringo Loco vs. Ninja Mack
Read more »
Posted by Ethan at 2:29 PM No comments:

Email ThisBlogThis!Share to TwitterShare to FacebookShare to Pinterest
Labels: 2022, GCW 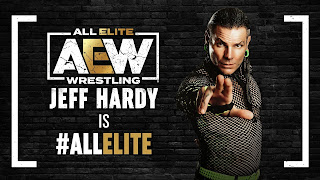 Commentators - Excalibur, Jim Ross, & Tony Schiavone
Chris Jericho begins the show with his thoughts on Eddie Kingston after his loss to him on Sunday at Revolution. Jericho looks young and sympathetic for once tonight.. I don’t know what he did differently. But yeah, he says he wants Eddie to come out so he can shake his hand because he respects the hell out of him for giving him one of the best matches of entire his career. Eddie comes out and says before they say anything, he wants it to be clear that he didn’t go into the match Sunday with anyone in mind, but the 4 people he met at Fan Fest the day before that said his players tribune interview saved their life. King said he didn’t want to shake Jericho’s hand on Sunday for him, he put his hand out for Jericho because he knows there’s something missing in there that caused him not to shake his hand. Jericho says he really just wants to thank and show respect to Eddie so they shake hands. 2.0 & Daniel Garcia run down and attack them both, but mainly Eddie. Santana & Ortiz run down for the save and JERICHO TURNS ON THEM AND BEAT THEM WITH A BAT. Some stuff shots in there too. This kinda fucking rules. Jake Hager is out next, he teases dissension with Jericho only to plow over Santana & Ortiz and maintain his alignment with Jericho. Hager power bombs Kingston off the apron through a table and it is NASTY. Hager, Jericho, 2.0 & Garcia do the Inner Circle middle finger pose. This angle fucking ruled and of course Jericho gives this new group a corny ass name.. “the Jericho appreciation society” … ima just pretend that part didn’t happen because otherwise this was awesome. Just call it Inner Circle 2.0 or something, dammit.
A video package airs on CM Punk’s victory over MJF at Revolution. Punk says if people thought they wanted the old Punk back, they should think again.
1) “Hangman” Adam Page (c) vs. Dante Martin - AEW World Championship Match
Read more »
Posted by Ethan at 10:20 PM No comments: 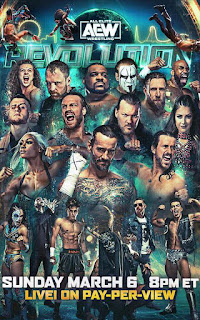 AEW World Champion: Hangman Adam Page (since 11/13/21)
AEW World Tag Team Champions: Jungle Boy & Luchasaurus (since 1/5/22)
AEW Women’s World Champion: Britt Baker (since 5/30/21)
AEW TBS Champion: Jade Cargill (since 1/5/22)
AEW TNT Champion: Sammy Guevara (since 1/26/22)
Commentators - Excalibur, Jim Ross, & Tony Schiavone
Last night, I had a bunch of friends over for what turned out to be one of the greatest wrestling PPV’s of all time. LETS GET INTO IT.
Pre-Show / THE BUY IN:
1) Kris Statlander vs. Leyla Hirsch
I’m very glad these women got this chance. Although the feud has come off as a back burner thing, I’m thankful AEW has tried to put in effort and keep it going. PLUS, the ladies have killed it, even in the promo pre-tapes. I complain a lot about the booking of the women’s division, but this show has three women’s matches in total so that’s a step forward. Plus, this one doesn’t even involve a total. So, yes, very promising. And to no ones surprise, or not mine at least, this roooocks. Lots of good grappling early on. Leyla goes after the arm of Stat and sticks with it. Leyla is really and truly SOOO good. Stat sells it well. They stick with the story and hit some sick spots. Including some crazy ones on the apron and floor. In the end, even with the awesome limb work, Leyla can’t put Kris away so she resorts to using a turnbuckle bar from under the ring when the ref was distracted. This doesn’t get her the win immediately, but it leads her to it. I liked this match, a lot. I think both women came out of this looking better than they did going in as we got to see their roles & characters accentuated with how the match was booked.
Match rating - ***
2) HOOK vs. QT Marshall
Read more »
Posted by Ethan at 10:27 AM No comments: